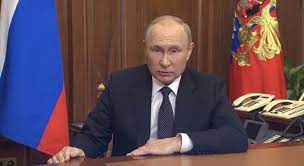 On Monday, Russian forces bombarded at least six regions in Ukraine with shells.

Russian strikes on Ukrainian infrastructure and a decision not to participate in a Black Sea grain-export program were responses to a drone strike on Moscow’s fleet of ships in Crimea.

On Monday, Mr. Putin stated at a news conference that Ukrainian drones used the same marine corridors as grain ships that transited under the U.N.-brokered agreement.

Kyiv denies any responsibility for the attack and has not claimed responsibility. When Russia claimed that its ships in Crimea were being attacked, the United Nations stated that no grain vessels were using the Black Sea route.

On the 250th day in a war that has continued since Russia invaded Ukraine on February 24, missiles from Russia rained down on the country. In Kyiv, explosions erupted and sent black smoke into the skies.

According to the General Staff of the Ukrainian Armed Forces, Russian forces attacked infrastructure in at least six Ukrainian areas on Monday.

At the televised news conference, Mr. Putin stated that “that’s not all we can have done”, indicating that more action may be taken.

Officials in Ukraine claimed that the energy infrastructure including hydroelectric dams was damaged, causing power outages, heat, and water shortages.

Oleh Synehubov (the governor of the northeastern Kharkiv area) stated on Telegram that approximately 140,000 people were without power following the attacks. This includes about 50,000 residents in Kharkiv, which is the second-largest city in Ukraine.

According to the Ukrainian military, it claimed that 44 of 50 Russian missiles had been destroyed. Authorities said that the strikes had left 80% of Kyiv without water. According to Ukrainian police, 13 people were hurt in the latest attack.

Russia has been attacking the Ukrainian civil infrastructure for three weeks using long-range missiles that are expensive and inexpensive, as well as “suicide drones” made in Iran. These drones fly at targets and explode.