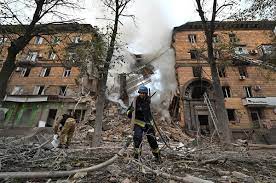 Moscow and Kyiv have reacted angrily to each other’s shelling of the Ukrainian-operated facility.

According to the general staff of Ukraine’s armed forces, dozens of people were injured or killed in overnight shelling in Zaporizhzhia’s southeast city.

“Information regarding victims is being confirmed but it is already known to dozens of dead and injured.”

Anatoliy Kurtev, a city official, stated that at least 17 people were killed when missiles struck a high-rise apartment building and other buildings.

Reuters was unable to independently verify the report.

A Russian-owned nuclear power station, Europe’s largest, is located approximately 125km (80 miles) away from the city. Moscow and Kyiv have been blaming each other for the shelling at the Ukrainian-operated facility that has caused damage to buildings and threatened a nuclear accident.