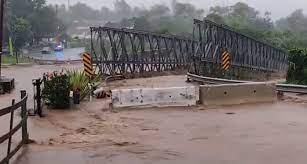 Category 1 Hurricane Fiona, with winds up to 140 km/h, caused “catastrophic flooding” in Puerto Rico on Sunday. It also caused a general blackout that affected more than 3.3 million people.

According to Pedro Pierluisi (the Governor of Puerto Rico), heavy rains and strong winds caused landslides, blocked roads and fallen trees as well as a collapsed bridge at Utuado, in the central mountainous area. This was all according to Pierluisi during a press conference.

Due to flooding and rising rivers, hundreds of residents in different areas of the island were forced from their homes.

According to Michelle Torres (spokeswoman for the National Guard), the evacuation took place in Toa baja (north), Cayey, Ponce, Salinas and Guanica, with the exception of Guayama which was in the south according to the EFE agency.

According to the US National Hurricane Center, Fiona’s maximum sustained winds when she made landfall were 140 km/h.

It also warned about “catastrophic flooding” in Puerto Rico as it heads towards the Dominican Republic as the hurricane moves northeast.

Both the territories were notified about the passage of Hurricane Irene and security protocols were activated by the authorities.

The Turks and Caicos Islands and Bahamas issued a hurricane warning Sunday and have begun their evacuation plans in preparation for the possible impact of Fiona.