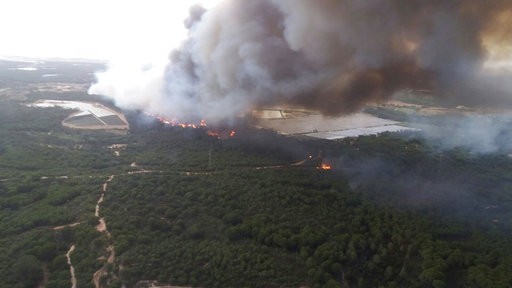 Violent storms and floods forecast for south of France this autumn

Severe storms, floods, and landslides are expected in southern France this fall, with 9 million people affected by long-term weather warnings in 15 regions. The alert came from Christophe Béchu, Minister for Ecological Transition, as he launched the seventh government awareness campaign against life-saving seasonal storms.

The risk this year is such that the annual campaign – which targets 15 departments in the south of the country – will be extended until November 30. Previous years’ schemes ended on October 31st.

“Unfortunately, all the climatic conditions are fixed in such a way that we find ourselves his year with very violent phenomena [in autumn]”, announced Christophe Béchu, Minister for the Ecological Transition.

Weather experts and climatologists have previously warned that severe and sometimes deadly storms – known as Cévennes episodes or Mediterranean episodes – could be more intense this year as the Mediterranean Sea is several degrees warmer than usual.

Abnormally high temperatures in the Mediterranean Sea, three to five degrees above normal, mean that “the warmer the Mediterranean, the more water evaporates, the more salt there is in the sky and the more it is likely to cause very heavy rains”, Meanwhile, the historic drought in France this summer means that the ground is arid, which means that water will not sink into the ground – as this experiment shows – and makes so flash floods much more likely.

France has set a new record for dry soil every day,” adding that conditions are worse in the south of the country.

“The soils are so dry, the temperatures are so high, that it can promote phenomena of diluvian floods that cause up to 200 liters of water per square meter and can be dramatic for the inhabitants,” Béchu said, as he warned residents of 15 départements along the Mediterranean arc to be alert to the risks of flooding and landslides.

They are home to approximately 9.1 million inhabitants, to whom it is advisable to pay particular attention to the weather forecasts, in particular, its weather alert system and the Vigicrues flood warnings, and to know the measures to be taken in case of bad weather.